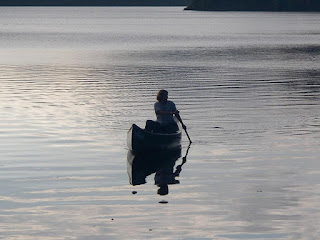 I've been wondering if I should change the name of my blog since I'm not really "solo" these days.  This thought process has unraveled some interesting bundles in my mind.  What does it mean to be solo?

For five days we sat in Hospice while Jim sank deeper into a morphine coma.  I was told by the hospice staff that hearing was the very last thing to go, so I conducted myself with the knowledge that Jim could hear all that was going on around him .... and I decided that he could also comprehend it all.  When friends would come into the room and want to sit by Jim I would go over and tell him who was here and that they would be with him for a little bit, and then I would motion for them to come over to the bedside and I would sit on the other side of the room with other family and friends standing vigil with me.

At night I would lay down beside Jim, touch his arm, his chest, his hand and tell him how much I loved him.  Tell him what an amazing human being he was, what an amazing life he led and how grateful I was to have been such an intricate part of it.  I would tell him that he could leave it all now, his fight with his disease was over. I would assure him that I would be OK, he didn't have to hang on for me ... and he could allow himself to dissolve into the heart of Buddha and leave his broken shell.

And on May 7th, 2010 he did just that.  I realized that he was completely solo.  No matter how much I attempted to comfort him, to let him know he was not alone in that room, in that night, in this journey ... he was.  There was no one else there for him in that final moment.  Only his spirit knows what that passing is/was.  And he did it ... all alone.

A few short months later I was kneeling by the birthing pool holding the hand of my niece, Jennywren, while she was in the throws of intense labor with her first child.  There was that final point where she looked at her husband, Jay - who was holding her other hand - and then looked at me and said "I can't do this. I can't do this. I can't!"  I put my head down onto hers and whispered in her ear, "Jenny, you HAVE to!"  There was no one else to do it.  She was on her own with this process, this journey.  And then she gave me a look that said "I could rip your face off" as she had her final contraction;  with a whoosh and a splash, little Skyla Mae shot into this world.

As the midwife caught this little being, that baby looked straight at me with a wide-eyed expression of "WHOA!  WHERE AM I?" on her face.  I'll never forget it!  And I realized at that very moment that this little person had to go through this process alone.  Connected by that umbilicus, yes, but there was no one else in that birth canal, no one else in that tiny body, no else was born with her at that moment.  It was only Sklya.

And, no matter how much comfort we offered to Jennywren during her labor she, too, was alone in her process.  Only she could do it.  Only she was in that birth zone with her pain and only she was there for that final push to bring that baby into this world.

No matter how many gather around us, ultimately, each of us is alone in our world.  No matter how many arms surrounded me in my pain and grief ... only I could go through my process.  I was alone with those tsunami waves, alone in trying to resurface and breathe again; I am alone now as I unravel these bundles of thoughts and memories.  Even though I have this new, amazing man who is so quickly becoming my dearest friend, who is now a companion to me and who has made the echoes in this house recede so that this old house feels like a home again.  Even with this ... it's still only me on this journey of mine.

We come into this world alone, and we leave it all alone.

Thus,  I'm keeping this name on my blog because I like it and because I feel we are all, basically, solo on our journey through life.

PS - thanks to David Lovejoy for this picture of me on Lobster Lake in the north woods of Maine.
Posted by Mary Lello at 8:33 AM 1 comment:

The stars are incredibly beautiful this morning. While I waited for the coffee to finish dripping I sat out on my deck for a few minutes allowing myself to get lost in their mysterious pin pricks of light.

Stars. Steve Jobs died this past week. At fifty six. Cancer. Once again the best of the best is taken too soon.

So many fabulous quotes of Jobs are getting shared via this internet system and on the very machines that he created. What an extraordinary man he was. I read a quote of his about being a genius:
"Here's to the crazy ones, the misfits, the rebels, the troublemaker, the round pegs in the square holes ... the ones who see things differently - they're not fond of rules ... You can quote them, disagree with them, glorify or vilify them, the the only thing you cant do is ignore them because they change things ... they push the human race forward, and while some may see them as the crazy ones, we see genius, because the ones who are crazy enough to think that they can change the world, are the ones who do it." Steve Jobs
It was probably very difficult at times for Jobs to be such a square peg, to have that brain that operated so differently from all others around him. But with his death I am learning of the integrity with which this man operated, even though he was such a huge corporate persona. And we are all hearing of this huge heart of his too. In a speech he delivered to the Stanford graduating class of 2005 he said:
"Remembering that I'll be dead soon is the most important tool I've ever encountered to help me make the big choices in life, because almost everything - all external expectations, all pride, all fear of embarrassment or failure - these things just fall away in the face of death leaving only what is truly important. Remembering that you are going to die is the best way I know to avoid the trap of thinking you have something to lose. You are already naked. There s no reason not to follow your heart."
Jim Daniels understood this those last few months while he lived so close to the veil, clinging to life but seeing death over his left shoulder. As compromised as he was near the end that man was grabbing for all the gusto that his life could offer him. He started to refuse to take naps so that he and I could be together and go for a drive, go visit others, sit outside in the early spring sunshine. The last fundraising event that was thrown for us was such a huge party and celebration and Jim danced all night with no embarrassment, no pride. He danced with abandon and joy .... and with all his heart.
I know, now, that he knew his death was close and he was choosing all that life would give him at that moment.
I too have learned so much from the experience of living with Jim's cancer; clinging to the pin prick of light that shone through his eyes during some pretty dark mornings. With this new relationship I'm embarking on I have witnessed this change in myself. Dave lived in Camden so there was a long distance dance that we were doing. He said to me, "we'll find our rhythm in this arrangement. We'll get through the winter and figure something else out." But I was the impatient one .... I operate from a different perspective these days. You see, I no longer believe we have all the time in the world. I've seen my life turned upside down with the snap of a finger. I've learned to believe that we only have today, tomorrow has no guarantees. Impatient ... yes! To live now, to grab for the gusto today, to appreciate all those pin pricks of light that sparkle through the darkness and to dance under the stars.
And so, we made the change and brought our worlds together.
Stars. SInce I don't know which of those up there this morning is my lucky one I send a "Thank you" to them all .... for this new laughter, joy and love ... again. And to the life that taught me to live in this moment ... this today.
Loving you all back,
Mary

Posted by Mary Lello at 8:00 AM No comments: