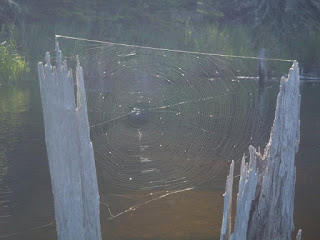 "We don't know what's going on here ....
Our life is a faint tracing on the surface of mystery, like the idle curved tunnels of leaf miners on the face of a leaf ... "
Annie Dillard

Jerry passed on May 23rd.  He was in hospice about 30 hours.  To say he was ready and willing is an understatement.  As he lay on that bed there were moments when he seemed awake and aware, other moments he was deep.  I would sit beside him and watch his slow, shallow breath and wonder where he was, what was going on inside his mind, what was he seeing?  I whispered to him, 'you're going to learn all the mysteries before me aren't you?  How I wish you could share them all!'

I believe it was Jerry's deep faith that had him pass through the Kubler-Ross stages so quickly.  He spent very little time in the denial stage, seemingly going straight to acceptance ... and then he embraced it.  He knew there was no fighting this.   As he had said,  "I feel I'm being chopped down by the master woodsman" .. and indeed, he was.  But he took this card he was dealt and turned it into a dance.  He went with grace and dignity.  He was actually looking forward to this next adventure ... that great beyond.

Those with near death experiences tell us there is something beyond this earth; it is stunningly beautiful and euphoric.  I like to believe it is pure Love.  The BIG Love, the one that is ever lasting, it exists in all beings, in all hearts, leafs, rocks, wind, sky and earth.  I think Jerry believed this too and he gave in and embraced it's coming.

Oh, that I might go with as much of an adventurous spirit as this man did!

Oh that I might live on this earth with this adventurous spirit and take each day as a gift and not squander my time, aware and awake to the mystery that presents itself to me; the small, red cardinal singing so loud from the roof next door,  a spiders web, the birth of a child with perfectly formed little hands and feet, the caterpillar emerging as a butterfly ... such mystery!

The morning of the 23rd Dave and I got the call in the wee hours of the morning.  We dressed and headed to my sisters house where her daughters and our niece had gathered after dealing with the final stages at hospice.  I planned to stay with Karmo for the remainder of the morning/day, going to bed in the spare bedroom at about the time I usually get up for my first cup of coffee, 4:30 a.m.  As I lay in bed, with tears streaming down my face I felt something.  I wiped the tears away and realized I was laying there smiling for I was feeling pure joy ... real joy.  And this joy was coming from the presence of two beings in the room with me; Jerry Sanders and Jim Daniels were there and informing me that all was fine.

At first I thought I might be hallucinating since I had only gotten three hours of sleep and had been up most of the night/day at this point.  But I was wide awake, I was lucid and I got a knowing that was deep and true ... this was real.  I had been asking Jim to come down to the veil, to come close for all of us, to be there to greet Jerry when he passed .... and by God, I believe he was!

Later in that day I shared this experience with the family that began to gather.  With tears in our eyes but smiles on our faces we all began to enjoy the thought of Jerry and Jim together again laughing their assess off and doing just fine.

It's us who must remain here, who have to soldier on without these loved ones with us, who suffer.

And who knows if any of this is true or not.  But if this thought helps any of us to get up tomorrow and get on with life .... then there is no harm in this belief.

But I remain a believer in The Mystery.  I want to be open, awake and aware to those moments. For this mystery exists all around us. 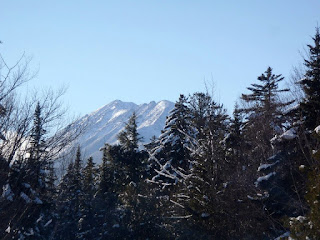 Many of you reading this may know that Jerry has laid down the gauntlet and chosen the fast track to ascending from this world.  He has stopped eating and drinking.  We are counting days now, verses months.

Monday the family gathered and there was a bit of magic sparkling for all of us.  Jerry was having an incredible day.  Many of us canceled all appointments on this Monday and gathered, the grandchildren were brought over and filled the day with laughter as they played on the swing that Jerry and Dave had built last spring.  Jerry was up and engaged all day.  It was, simply, a wonderful day.

Someone reminded me of this saying, "God only gives you as much as you can handle" ... I say really?  Then God is running things a little heavy handed lately!  And "if it doesn't kill you it will only make you stronger", right?

I could probably take on Atlas by the end of all this then.

This really is a bit too much for one family, I feel.  And yet, there is grace and there is joy and there are some really wonderful family dynamics starting to bloom that had felt like they might never flower again.  This is a bit of what Anne Lamott calls in her book,  Traveling Mercies, the miracles in the everyday.

And I guess it is this God that I acknowledge and can turn to.   The one that still offers these miracles in the everyday, the tiny little moments of joy out of all this grief.  With this too-large bag of shit comes the smaller gifts that one can feel and recognize because the breast bone feels cracked open and the heart feels unguarded and vulnerable .... but wide, wide open.

It is this moments that grief is turned to joy ... and back again.

Jerry was sitting in the sun in a hammock on Monday with his morphine pump always with him now.  It was just he and I there for a brief moment and he looked at me and said with a smile, "if it wasn't for this cancer I'd feel pretty good".  We both laughed and I replied, "if it wasn't for your cancer I'd feel pretty good too".  He looked over and smiled a knowing smile at me.

"Laughter and crying,
you know it's the same release... "
Joni Mitchell

As the world blooms, the earth warms and softens, it calls those who are weak and tired home .... I guess.

The tears offered, again, this May are enough to water the emerging flowers.

Posted by Mary Lello at 6:54 AM No comments: