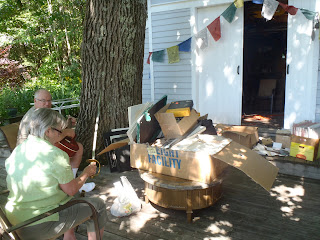 I spent a couple days last week pulling down boxes that belonged to Jim from up over the barn.  Jim's sister, Donna, was here and had told me she would help with this project.   Several times Donna looked at me and said "are you OK with this?" as we went through another box filled with slides and old portfolios.  Dave would come in and out and he too would pull me aside and gently ask, "Are you doing OK with all this?"

I was doing OK.  I did have one moment in that small, over-heated space when I pulled out one  box and looked inside.  I had to just sit down on the nasty floor boards up there and let the tears flow.  While I tried to compose myself I looked up and saw a spider dangling from a single thread that was  being illuminated by the sun streaming in the one window I sat beside.  As this little, nondescript spider pulled herself up onto, a seemingly, invisible line she started doing that little dance spiders do, with legs flying, and ... presto! ... that single strand was attached to her ever-growing web.

As she rappelled from another thread secreted from her abdomen I heard a voice in my mind that said "One thread. A new web. A new life".  I wiped away the tears with the back of my hand and thought, "Yup. Perfect. Thank you!" ... and carried the next box down to the deck.

Donna came back to Maine to visit for the first time since Jim's death.  I know she had to send out her own little tender thread across the 2,000 miles to begin building a new bridge from Colorado to Maine. A bridge that has been solid and strong for so many years built by the love of a brother and  his sister.  A physical bridge she and her husband, Mark, had to travel to get here.  And an emotional bridge that needed to be stood on, and crossed.  Walking into my house has another level of reality that hits friends and family when they return for the first time .  Jim is not here ...  the energy has changed along with many other things.

Sometimes it just feels like the Universe takes control and manipulates things for the better.  Originally, when Donna and I were communicating about this trip, discussing when she should come, I had told her any time BUT July 9th weekend.  Dave and I would be away.  Two weeks before she was to come she called and said she had just booked the flight for July 9th.  Ooopsy!  We both went into a short-lived panic as they would arrive the very day that I would be leaving.  After hanging up the phone with her I felt a calm come over me and I heard, "this is perfect".  And with a bit of thought I realized it was.  Donna and Mark would arrive at the house and have a full three days to themselves before Dave and I returned.  Donna would walk into this space and have a bit of time to just let this new layer of reality take its hit on her; to just feel and be in this house that once was the home of her brother.

I could never have orchestrated that so perfectly.  And I'm always grateful when I feel that gentle hand of something outside of myself sort of take over.   I feel this frequently and I never take it for granted.

Donna and Mark were here for a week so we had plenty of time to connect.  We did some fun Maine stuff together; went to the Boothbay Botanical Gardens with my 90 year old mom, ate lobster rolls, sat out on the deck here at home and drank G/T's and Donna, Mark and Dave got to know one another.

But the important event, for me, was having Donna be willing to help me with all those boxes filled with all of the things that Jim had stashed up there.  I hauled so many, many boxes down and Donna and I would start to go through their history.  I would hold something up and raise an eyebrow,  Donna would look at me and say "toss it Mary!"

There are many things that need to be saved too.  Jim Daniels was an amazing photojournalist with a true gift and an incredible eye.  So many images, moments, captured that must be saved.  I still get horribly overwhelmed by this and what must be done with these treasures.  God how I wish that man had been able to tell me what he would have wanted done with everything!  But he couldn't, having lost the ability to talk among other things - the last months were spent just trying to survive. 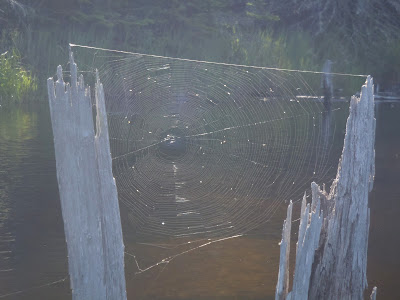 So here I am with many boxes still up there to wade through and make decisions on.  Many family and professional images to go through.  Many memories to thrust me back, many more tears to cry to cleanse my spirit.

But, I heard and I shall remember ...

Loving you all back
Mary
Posted by Mary Lello at 12:03 PM 1 comment: