I think it would be a rare person who doesn't have a visceral reaction to this title.  It seems every one  has had a close association with this word, this diagnosis, of either a friend, family member or oneself. For me today it's my sweet, thirteen year old dog, Ella.

She had a tumor on her belly that blossomed when Jim was sick.  I said it was her sympathetic tumor.  Her Veterinary said it was probably a fatty tumor and benign but if I wanted to biopsy it? I didn't.

After Jim passed I would lie down beside her and speak softly to her as I massaged her belly, "we don't have to try and heal him anymore.  You can release these tumors now."

For two years there was no sign of any other tumors.  I could feel some bubbles under her skin, but they weren't getting any bigger.  I thought we were good.


In October of this month the little bubble on her right shoulder began to grow.  It was the size of a marble at first, growing to a golf ball .. then an orange ...soon a softball ... now it's close to a football in size, though not in shape. It gives her no problem at all.  I touch it frequently to see if it hurts her, it doesn't.  But it's hard and it's hot.

I took her to the Vet this past week.  "How long has it taken for this to grow?" ... "Three, maybe four months?" ... "That kind of speed in growth tells me this is probably malignant.  We can biopsy it if you'd like?"   The fact is, Ella is 13, has two different strains of Lyme disease that, although treated, has become a chronic problem with her mostly as hip and joint pain. She has arthritis in her front legs and that discomfort is evident also.  What would validating that this is cancer do for us?  I'm not going to go into any kind of cancer treatment for her; that would be far too traumatic for both of us!

The Vet agreed.  She tried to aspirate the tumor, hoping it was filled with liquid and extracting some of it would take the weight out of it.  She wasn't able to really get anything, it's a dense mass.  She said to me, "We need to talk about your future plans for Ella." ... gulp.  "This tumor could continue to grow and become quite massive."  She held her hands too far apart in demonstration.   "When it gets much larger it's going to become really uncomfortable for her and put a lot more strain on her joints increasing that pain as well."   You're going to have to make a decision about the quality of her life at that point."  Sigh. 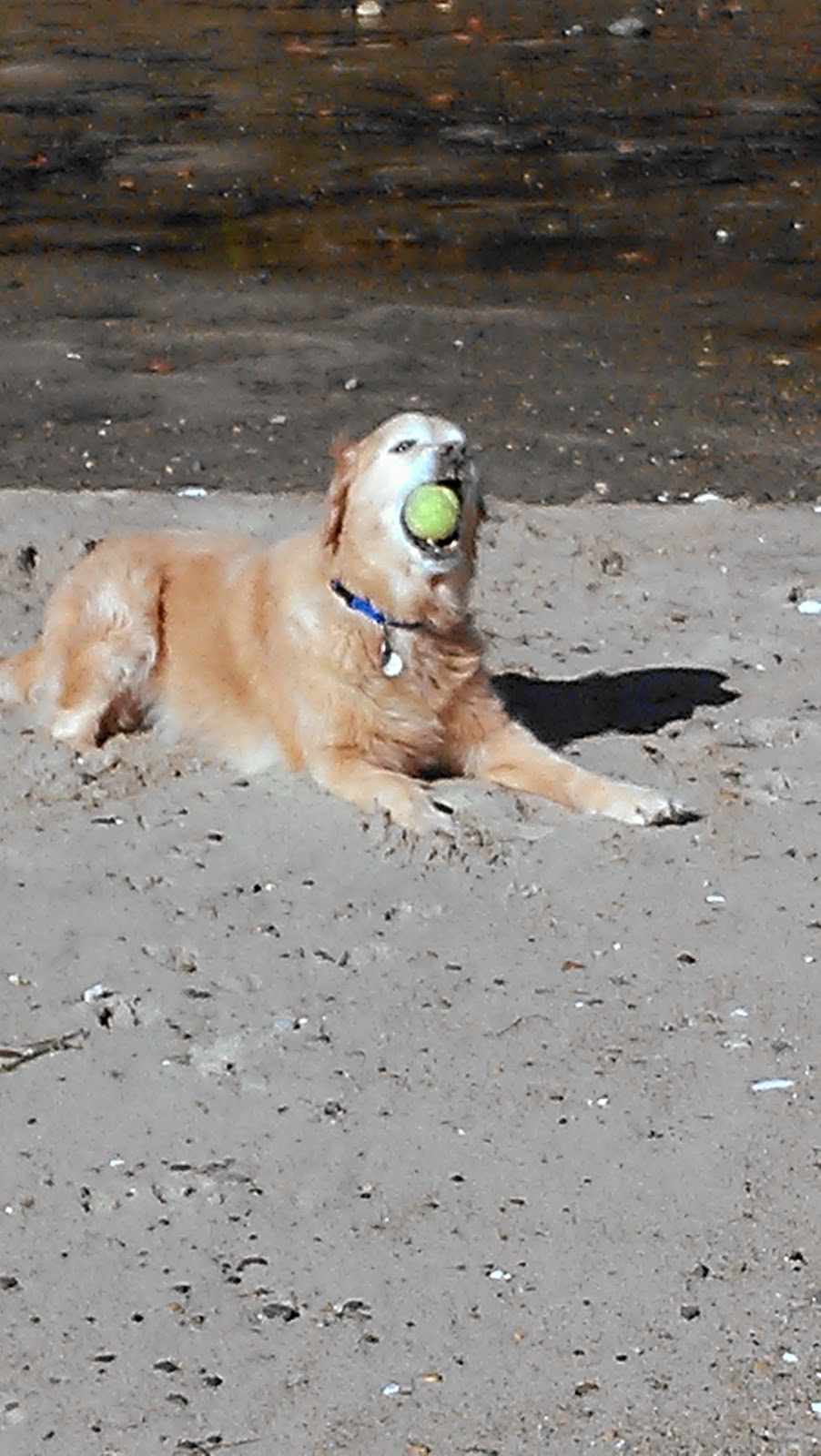 The Vet called me today to just inform me that as this tumor grows it may split open.  WHAT?!
"I wanted to just tell you this Mary so you aren't alarmed if it happens.  If Ella bumps it or scrapes it you  may find that it splits open so you will need to be prepared to deal with wound management and care."  It was so good of her to call because I certainly might freak out a little bit should this happen!

Cancer. Seems it's never pretty and, more often than not, it's damn messy!

I've had to put three other dearly loved dogs down in my history as a dog owner. This is my first one to go because of cancer.  I know that look in their eyes when they are tired and done with this world.  I have always listened to that message when they have told me it's time.  I know I will recognize this in Ella too.
But, damn, it hurts!

I recently saw my favorite psychic, Tracy.  Every time I go to see her she mentions Ella, though she's never met my dog.  She describes her perfectly and always says what a wonderful little being she is, how this dog and I have gone through a lot together and that Ella is very bonded to me.  This last time she said, "Well, there is still a little bit more time with this little gal.  But when it's time, you are going to need to take a few days to be with her.  I know this sounds luxurious, but she is going to need this from you and you will want to be there for her.  So I really think you should plan on having time off in order to spend this time with her."

And, I guess it's coming sooner vs. later.  The Vet didn't feel we needed to give Ella any of her vaccinations that she was due for this season.  We only gave her a rabies shot, and this, only because it's a state law.  I respect our Vet for being this honest and encouraging me to not do the shots.  She never put a time line on it but I think we've only got a few months.

This little being has, indeed, been there for me.  She stayed close to Jim when he was sick.  He would get upset sometimes that she wouldn't come over to him when he called to her .. but I would point out to him how she always stayed close.  I reminded him that sometimes she wouldn't go on errands with  me, backing away from the door and turning to go lie in the living room with Jim.  He would smile at this and say, '"yes, yes, yes."

When Jim died and  I was left alone Ella was there for me.  She was a warm spot on the other side of the bed, her snores comforting.  I began to feel very vulnerable because at night I remove my hearing aids and I became aware that I probably wouldn't hear the smoke alarm or someone breaking in or whatever sounds might be important to hear at night when one is alone.  I would look at Ella and think, she might just pull through for me if anything were to threaten me/us in the night.  So, I would fall asleep with this thought.

She was my trail running buddy and motivation to get out there when I really didn't feel I could.  She needed to to go ... loved to go. So out we went, both feeling so much better after the joy of being on the trails.

And now, she wants to lie where all my clothes are; wants to be at me feet where ever I am; doesn't want me to leave, even if Dave is staying home.   Jim demonstrated this same desire to be with me  .. I know, that sounds weird, but near the end he wanted nothing more than to spend as much time with me as he could.  I think he knew he would be leaving sooner than I was ready to accept and so asked me to be with him as much as possible.  Ella seems to be doing the same thing these days.

And I will be with her as much as possible for the duration of whatever time we still have together.
She has gladdened my heart so many times ... so I know she's going to break it into many pieces too.  But it's all a part of this thing called life and being willing to  love, even when we know how painful it will be to lose that love from this world.

The Buddhist tell us that loss and it's  pain is a gift to us, for it is what life is all about.  There can be no joy without grief, no life without death.

You cannot open your heart to love if  you are filled with fear of the potential loss.

I would not want a life without love.

Loving you all back,