"A Sense of Wonder" 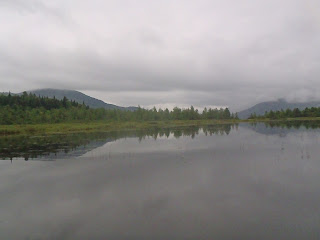 Prior to becoming an acupuncturist I use to be an environmental educator in another life.  And after that life I became a high school science teacher.  Regardless of the grade or the "classroom" I always tried to teach a sense of wonder to those young minds that were opening to the world I was showing them.  The world of insects and plants, trees and birds, lichens, moss and single cells.  Rachel Carson had instilled in me the importance of "not knowing"; the importance of simply seeing something and feeling awed by it.  The importance of a sense of wonder.

I still nurture this in myself.  I am awed whenever I hear the Loons talking on the pond with that wailing, octave jumping song that echoes across the valley, calling to a mate.  Hearing that song always stops me in my tracks, as I stand silent and listening and feeling as it stirs the wild child in me.  Trillium, Jack-in-the-Pulpit, Mayflowers and bright green moss has me taking a moment on the trail to look closer and to simply notice and feel the joy in their being there.  Rejoice in their ... being.

Last week Dave came and gently woke me from a deep sleep.  I glanced at the clock, it was 1:30a.m.
"What?"
He took my hand and said, "come outside, you have to see this."

I pulled a warmer shirt over my pj's, stumbled to the living room and slipped my feet into a pair of boots that sit by the sliding door that opens to our deck.  As I stepped outside I literally gasped.  The air, the fields, the lawn, the trees, and the entire sky was filled with thousands of twinkling lights; winking, blinking, tiny yellow beams of light.

I felt like I had walked back into my childhood on Scarborough beach where on those hot August nights someone would suggest a swim in the surf.  On those very special nights, running into the waves there might be an explosion of tiny, white lights!  Sparklers, shimmering and twinkling as they dripped down our hair, disappearing back into the water.  Fireworks bursting beneath my fingertips as I twirled in place, trailing my spread fingers behind me through the water to ignite the phosphorescence; an arch of brilliant light beneath my fingers. Diving into the water I was a Mermaid with a glittering trail before and behind me.  The foam of every wave illuminated with bright, white, tiny lights.

In that very early morning standing on our deck Dave and I just held each other in awe as the night sparkled all around us with the mating "calls" of the Firefly. There was joy in being part of this amazing, extravagant display, feeling so lucky that I was there to witness it. Thirty minutes later a thunderstorm hit and all those tiny lights went out.

“Those who contemplate the beauty of the earth find reserves of strength that will endure as long as life lasts.”
Rachel Carson 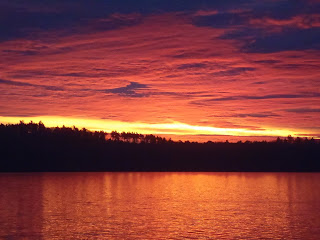 Posted by Mary Lello at 2:55 PM No comments: