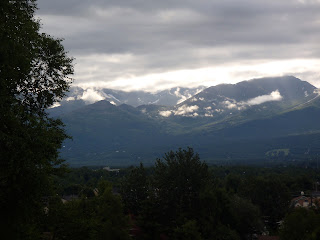 I recently went to Alaska.  It was the experience of a life time, not only because Alaska still feels so wild and is incredibly gorgeous, or because the people are pioneers and wonderfully eccentric but because I was traveling with my 90 year old mother and two of my sisters.  This hasn't happened since I was eight years old and my parents loaded up the old Ford station wagon, jammed all five kids into it with all our luggage and we drove across country to California.

This recent trip came about because my oldest sister, Karmo Sanders, and her husband, Jerry Sanders, have spent the last 12 years writing a musical.  Yup, that's correct ... a musical!  And all of the family and all of the friends have watched and participated in the birth of this baby with trips to Boston to witness the readings, the re-writes, hearing the new songs, commenting on the old songs, having these songs in our heads for weeks on end ... for twelve years.   The theater, Cyrano's, in Anchorage Alaska got wind of this musical and raised the money needed to put this show up.  A full blown production with professional actors singing and dancing, costumes, sets, lights, ACTION!

It was full-on-mind-blowing.  After all, it's not every day you get to see a musical that your sibling created!  And Alaska was the perfect place for the premiere.  The musical, The Gold Rush Girls, is set in a brothel in the Yukon.  It's adapted from the book written by Lael Morgan (The Good Time Girls) about the women who followed the gold rush. http://goldrushmusical.com/

Of course mum wanted to go and be there for the opening night.  My sister, Jayne, said she would fly out with her.  But my mother decided that all of the siblings who wanted to go should be there for this event.  She also knows that none of us have money for spontaneous vacations, so she offered to buy the plane tickets ... and then the car rental ... and then the apartment rental ... because, as she told us, "I can either give you the money after I die or we can spend it now and have fun with it".  The verdict was let's have some fun!

My mother, at 90, is amazing.  She's a bit unsteady on her feet now and can't walk too far without needing to rest.  But her mind is as sharp as a tack and her spirit is young and still soaring .  This woman never once said "No, I'm too tired", or "I don't think I can do that".  She was always the one who would say "Yes! Let's go!" and she'd grab her cane and be the first one ready for whatever was next!

In Alaska this time of year it stays light until after midnight.  This makes it real easy to stay up long past a normal bedtime.  While out there we were lucky enough to get into two of the shows and after each one we were invited by the cast and crew to join some of them for drinks.  We would look to mom and ask tentatively "are you up for going out?" and we would get, "Yes!  Let's go!"  Thus my mother was out until 1:00 a.m. (dusk in Alaska) shooting shots of an Anchorage speciality called The Duck Fart.  The music director, Dan, told mom "Mary Lou, you don't sip this, you have to shoot it".  My mother looked at me, turned and looked at my youngest sister, Sara, shrugged her shoulders, tilted her head back and slammed that drink down, much to the delight of everyone at this gathering!

As I have mentioned many times in this blogosphere my dad was a minister in a small town in Maine.  He was a bit of a hero in this town as everyone loved him regardless of their religious leanings.  My mother was the ministers wife, which had many sides to it, up and down.  Life was a bit like being in a fish bowl in such a small town and mom would have to put on a good game face sometimes when she would walk into church; even though she may have just had an argument and thrown a book at that guy up behind the pulpit.  She walked into church with her gloves on, a reverent smile and an aura of complete calm and composure while her children pinched each other in the pew or one child decided to whistle the hymns that day verses sing them (yes, this is true).  The First Lady had nothing on my mother during those twenty six years of being the Reverend J.N. Lello's wife.

Except for that trip across country to California my parents never traveled.  After my dad retired my folks moved to Scarborough and the small Cape that my grandfather (mom's dad) had built for them.  They saw the last child, Sara, finish high school as dad became progressively ill with lung cancer.  Just as Sara fledged the nest my dad became too ill to be able to live any kind of exciting life.  My mother went from taking care of children to taking care of her dying husband.

Mum would have loved to have traveled again with my dad in their retirement years but it never happened.  We all had come to appreciate that Mom had this adventurous spirit in her that had been stifled for most of her life.  Once Mom was telling us about an outing she was planning to do with some women friends; they were going to take the ferry from Portland for a short ride out to Peaks Island for the day.  On hearing this Sara said, "Mom!  You are finally getting to go over seas!"

Within a year after dad died Karmo's youngest daughter, Jenny, was going to go to Russia with her class during a school vacation.  My mother called the school and asked if they needed any more chaperones.  Indeed, they did.  So Mum signed on.  Her first airplane flight in her entire life was to Russia.

Everyone who met my mother on this trip to Alaska fell in love with her, including three young men who worked for the airline at the Anchorage airport.  While Jayne, Sara and I were in line to get our boarding passes home our mother sat over by the windows chatting with these three employees whom she just struck up a conversation with.  The three daughters watched this scene - these young men leaning forward talking with this little, old lady, throwing their heads back and laughing.  The three of us just shook our heads and laughed.  One of these guys was to be mom's wheelchair driver ... but all three of them showed us through security and to the gate!  As we were escorted to our gate one of these men turned to me and said  "who is this woman?"
"That's my mother."
"And she's 90?!  We figured she might be 70-something, maybe 80, but 90?!  She's a hoot!"

Alaska was amazing and I shall cherish this trip for the rest of my life.  Traveling with and observing my mother helped me realize just how much she has handed down to all of us; an interest in people and their stories, a sense of humor that allows us to laugh at ourselves, a pioneer spirit and thirst for life.

I have an amazing family who I love dearly and feel very proud of because creating and producing a musical is just the tip of the ice burg to the talent that exists in it.  But I hope to hell that I have my mother's genes so that when I'm old and slow if someone asks me if I want go out and have a Duck Fart I'll always say, "You bet! Let's go!"

Loving you all back,
Mary
Posted by Mary Lello at 8:53 AM No comments: