I first met Jerry when I was thirteen years old.  My sister, Karmo (a.k.a. Martha), who is six years older than me, had left the small town of Norway, Maine for the wild land of Oklahoma to go to college.  She returned with a long, lanky, slow talking man, Jerry Sanders.

Jerry brought a whole new world into the Lello family with his knowledge of horses, open range, big sky country and how the Oklahoma wind would blow.  Jerry seemed to do everything slow, his accent is  a western slow drawl, and he walks by throwing one long leg out in front of him, planting it firmly before throwing the other one out ...  and he takes it slow.  Back then I commented to Karmo that he even drank water slow!

One of my very first memories of Jerry was when mom served chocolate cake with white frosting for desert.  Jerry got up from the table and sauntered to the cabinet, pulled out a big glass and filled it half full with milk.  When he returned to the table he sat down and picked up that wedge of cake that was on his plate and jammed it into the glass of milk and proceeded to eat it from the glass with a spoon.  I'm pretty sure my jaw hit the dining table, but mom grabbed my arm in warning.  I looked at her with eyes popping out of my head ready to say something and she gave me a look that said "NO!"  In my family you didn't say "ew" or wrinkle your nose up at food, you just said "no thank you" to it.  And you didn't comment on how other folks ate their food.  But this move of Jerry's, well, it took the cake!

Of course, days later, I tried this method before that cake was all gone.  It's really good.  And his two daughters have done it since they were small.  And, yes, we're seeing the grandchildren do it now too.  It's an Oklahoma thing and I find it incredibly endearing now.

Jerry speaks about one of his first memories of meeting my youngest sister, Sara.  When he walked up to our summer house in Scarborough Sara was tied to a rope that was tied to the porch post.  Karmo gave a little nervous laugh and spoke to Sara between clenched teeth, "Sara, get up!"  Sara barked at her and started to pant.  Sara, at 6 years old, wanted a dog so badly that she decided she would just be a dog since she couldn't convince the folks to get another one.  So frequently we found Sara tied to the porch barking and panting.  Karmo pointed at her little sister who was on her hands and knees with her tongue hanging out and said, "Jerry, this is my little sister, Sara."  Jerry walked by, patted her head and said, "good dog" on his way into the house.  Sara wiggled her butt ... er ... wagged her tail and barked again.

Jerry was exotic with a huge beard, long hair and the ability to play almost any instrument he picked up.  He'd sit at our piano in the front room in Norway and compose amazing music.  We were use to hearing the scales or chop sticks coming from this old stand-up piano, but when Jerry sat down to it there were whole new melodies to be heard and not one sheet of music in front of him.  He plays the guitar and the drums, the spoons and the harmonica and just about anything else that will create a good sound that you put in front of him.  He composes wonderful songs for the kids to dance to.  I guess I grew up hearing all this music and watching my nieces dance all around the kitchen.  There are new songs now for the grandchildren to wiggle and hop to.  So many original songs.  So much wonderful music composed by this man including the score of a musical that he and Karmo wrote together and was professionally performed in Anchorage, Alaska in June 2012.

Jerry is also a gifted healer.  It was Jerry who introduced me to a system, or rather, an intelligence, twenty years ago that assists me in my acupuncture practice now.  When Jim was so sick Jerry came two times a week to do his healing work for Jim.  The magic of Jerry may have contributed to the fact that Jim survived twice as long as predicted.

Jerry has a calm, quiet presence about him that  has everyone in his aura relax a little bit.  During the 18 months of Jim's illness any kind of function, family or otherwise, that Jim and I would attend  I found that if Jerry was around I could relax knowing that he had stepped in.  Jerry would take such good, attentive care of Jim and would stay with him and help him with whatever was needed ... and I was allowed a little bit of breathing space.  When we discovered that Jim could sing songs perfectly, even though he couldn't talk, Jerry practiced Bob Marley's song with Jim, I Can See Clearly Now ... and the two of them sang this song at a fundraiser event put on for Jim and I.  I can't hear that song without tearing up anymore. 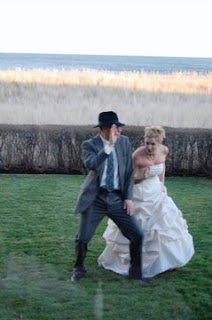 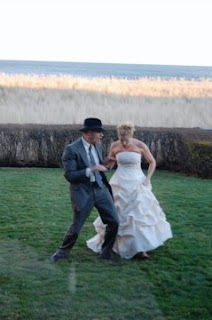 Jerry has always moved beautifully.  He studied Mime under Tony Montero in South Paris, Maine.  He has taken that discipline and become a dancer, participating in, as well as conducting his own, dance classes in the Portland area.  He's a gorgeous dancer.  One of my favorite images is of Jerry and his daughter, Jennywren, at her wedding reception dancing on the lawn that spread down to the beach.  Someone handed Jerry a fedora hat and he suddenly became Fred Astaire as Jenny hiked up her wedding gown and she and her dad circled and twirled around each other using all that open space as their dance floor. We all just stood back and watched, smiling and clapping.  This father and daughter dance was unique and wonderful!

When my family wigged out a little bit over this new love I have found ... well, Dave and I have moved very fast as we both have just known from that first meeting that this was incredibly special .... it was Jerry who looked at me and said, "I have one word to say to you Mary ... Joy!"  And that is the one word I have clung to as friends, and some of my family, questioned my relationship with this new guy earlier on.  Joy.  Jerry understood.  Jerry got it.   Jerry saw a lot of what went on in my world while Jim was so horribly sick and dying.  Jerry saw how I slowly caved in and lost the sparkle of my being.  And Jerry saw how that sparkle returned the moment I met Dave.  Joy.  Only Jerry could see it so clearly and sum it up in one word.

And now my family must again dance this cancer dance as Jerry was diagnosed only a month or so ago with stage 4 colon cancer that has metastasized to his liver and lungs.  None of us can imagine what our world will be like without him.  It is this man, the rock of stability for this Lello clan, the calm, gentle force of his own growing family, who we must accept losing.

How the hell does this happen?

And I know, too well, how terrified Karmo feels.  And there's nothing I can do to help her really.  We can all tell her how we are here, and will always be here for her, but the fact is, she does have to go through this alone.

And my heart just breaks for my nieces and those four gorgeous grandchildren who will lose their Beepa and his music to dance by.

This is Jerry, and a few of my memories that I share with him now, while he's still here to know of them and to tell him ...

I'm hoping you can click on this link below and see Jerry singing one of his many songs.  Karmo and Jerry hope to have time enough to get his songs recorded and put onto CD's that can be bought in the very near future.  Enjoy!  And go ahead and dance!

Posted by Mary Lello at 5:19 PM No comments: 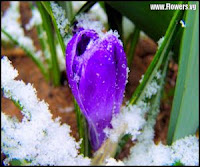 Since 2011 April has proved to be a very difficult month; that ol' cellular memory kicks in sometime during the showers and the May flowers.  This month the beast started to show its' fin a full month prior to Jim's anniversary.  Still catches me by surprise too;  I can't really explain why I feel cranky and irritable, or get caught staring into space or have tears flowing down my cheeks for what seems like no reason.

What?  Really?  Oh, sorry, not sure what's wrong with me.

And this April the beast has practically crawled into the boat with me and tried to swamp my entire vessel.  My brother-in-law has been diagnosed with Stage 4 cancer.  My entire family has been brought to our knees .... once again.  Another very fast train with no luxury of preparing.  There are treatment options but we all know that these will simply kill you slower and what's left of this sweet life will go down the toilet too.   Not much of an option at all.

And the beast circles.

Some days it just nips at the achilles and I falter in my step for a moment, regaining my balance quickly so that most don't even notice.   This past Sunday it grabbed me and dragged me deep.  I was expecting it.  I've learned to just ride it down, close my eyes, keep breathing, sink into that darkness before bobbing back up to the surface a little worse for wear.

And this whole cancer dance is too familiar.  My sister tells me she is exhausted.   They had family from his side visiting at their house.  People gather to just be together and, perhaps, to say good-bye. She tells me, "It's wonderful, it's all good but... and it's ...  exhausting."

And I'm back to walking outside and looking to my crows and the morning sunrise and asking why?  Even though there is no answer, there is no comprehension of this, nothing that my little Being can grasp.  I hope there is a bigger plan than I can ever understand.  It is this belief that allows me to keep resurfacing  ... once again.

"I've learned that no matter what happens, or how bad it seems today, life does go on, and it will be better tomorrow."  Maya Angelou

I guess I've learned this too.  But sometimes that "better tomorrow" feels like forever.

Loving you all back,
Mary
Posted by Mary Lello at 11:27 AM No comments: